The very nature of the psychedelic experience makes it difficult, if not impossible, to put into words. We can try to describe its qualities, such as enlightening, twisted, or sacred, but what we actually go through is beyond the capability of our words.

It‘s not just because we don‘t have adequate words, but also because words are inherently unfit to describe matters of consciousness. Like the single beam of a focused flashlight only brightens one spot in a dark room, words can only describe one thing at a time. A high mind, on the other hand, is more like a floodlight, perceiving the room in its totality.
Consciousness explorer and psychedelic connoisseur Tim Leary has been mapping out the psychedelic space for years and developed a scale to assess the intensity of the trip. Based on the Tibetan Book of the Dead, an ancient religious text that deals with the nature of reality and the mind, Leary translates the Tibetan Bardo states into 5 Levels of Psychedelic Experience. Here‘s what they are.
LEVEL ONE: 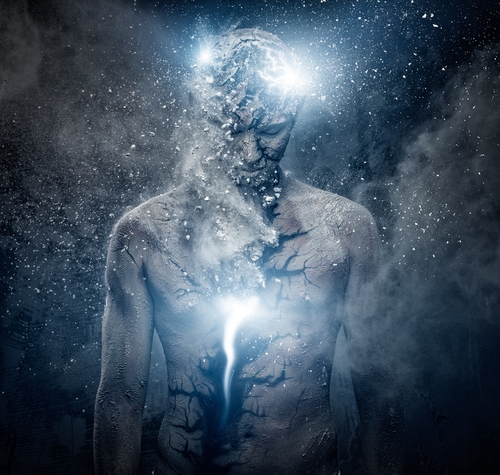 Cannabis, being the mildest of psychedelics, induces this state in moderate doses. A mild high is produced, whereby enhanced mood and sensuality is experienced. The communication between the left and right side of the brain undergoes subtle changes, possibly inducing mild synaesthesia, which is an intermingling of sensory perception. Music is perceived more vividly, starting to mix with imagery and direct emotional perception.
LEVEL TWO:
This level is reached with high doses of cannabis or low doses of psilocybin. The user will experience mild visual effects and behind closed eyelids patterns start to emerge. Normal thought-filters of the brain are bypassed, leading to an increase in unrestrained, abstract and creative thought patterns. Unconscious emotions and thoughts bubble to the surface. Light doses of Peyote and medium doses of MDMA also induce this state.
LEVEL THREE:
This level is achieved with regular doses of psilocybin or LSD. Fractals are taking over the visual field, warping patterns and kaleidoscopic imagery are perceived on surfaces or with closed eyes. Sensitivity to subtle body energies increases, profound insights into life might be perceived, or ecstatic trance can occur. The intermingling of senses can be even more pronounced, causing all kinds of dissociative experiences.
LEVEL FOUR:
Strong doses of LSD, psilocybin, Peyote, and other entheogens induce level four experiences. Strong visual patterns, intense visions, direct experience astral spheres, and dissolution of time. With an opened eye, physical objects can be exposed as manifested, condensed energy forms. Out of body experiences, strong spiritual visions, and direct perceptions of wisdom are commonly associated with this level.
LEVEL FIVE:
This is the epicenter of the psychedelic state and is usually obtained with DMT or considerably high doses of psilocybin. While this level is marked by a complete and absolute immersion in visions, this state is distinctly different in quality and what is experienced - it can be called an enlightenment, or union with the great life force. This is in the eye of the storm, nirvana, or complete transcendence. Other-dimensional beings might be encountered, or the pure, the unmanifest energy beyond the illusory circus of life can be felt. The most common experiences are as follow:
1. Being thrust into an expansive void or alternate dimension filled with beings and intricate, detailed worlds of bizarre and unseen quality.
2. Being propelled into outer space at extreme speed. Cosmic experiences, such as finding yourself witnessing the creation of a new star system, have also been reported.
3. Traveling at great speed whilst experiencing changing patterns, which often morph and open into more complicated patterns within.
4. Encountering intelligent entities whilst experiencing any of points 1, 2 or 3. From machine elves to space cowboys, intelligent entities have ranged from things out of fantasy novels, such as humanoids, to giant insects, visually indecipherable entities and floating balls of light.
5. Intelligent entities attempt to communicate with the user through visual patterns, prompts, and cues. Sometimes entities take the user to specific places to try and get across a message, such as encouragements to learn postures, or they teach songs that manifest objects or condense energy.
These extreme states are sometimes accompanied by sounds, ranging from deep rumbling to high pitched crumbling. Although completely immersed in the experience, most DMT users remain sentient throughout the experience, being able to think clearly, reason logically and maintain a self-awareness.